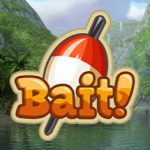 As relaxing as a real fishing trip but may quickly become boring to some due to repetitive gameplay.

I’ve never been a fan of fishing. It looks like an awful lot of work for something that you only get to keep for a few seconds before it gets tossed back into the water. But I decided to try my hand at it in virtual reality, and what I found was Bait, a game by Resolution Games that is decidedly more enjoyable than its name would suggest.

So the story is pretty basic.

A businesswoman asks you if you would be willing to catch a fish for her aquarium. She tells you that the Prehistoric Perch is a rare fish that has been rumoured to only exist in this particular country lake, and she needs it to save her aquarium from financial ruin.

And so, your fishing journey begins…

Bait! is a casual fishing simulator that takes you out to an open body of water and lets your choose where you cast your line. There’s no pressure here- just find the spot you like best, grab your rod, cast your line with a flick of the controller, and wait for one of over three dozen species of fish to take your bait.

When you get a bite (as indicated by a rumble in the controller and the float disappearing and being replaced by a semi-circular progress bar), it is time to reel the fish in.

This is where it gets a bit clunky. The rod is held with the right controller and you must reel in with the left controller. However, to get a grip on the reel, the two controllers must be very close together. This leads to them constantly being smashed together as you try to land your catch, which isn’t great for the controllers.

There is an option to reel in using the trigger but I feel it takes a little bit away from the realism of the experience…but I guess there are real anglers that do use automated systems like this. Nevertheless, the gameplay could be improved if the proximity of the controllers could be increased.

The game can be played either standing or sitting and the controls (other than the aforementioned issue) are so easy to use that grandad could pick it up in a couple of minutes. There’s very little physical or mental exertion…it’s just one of those games to chill with when you have a bit of spare time.

The graphics are indeed very nice. Pleasant, in fact. I wouldn’t go so far as to say they are amazing but they are perfect for this game and add to the atmosphere and charm.

Each species of fish is unique and well designed and you can see their shadows darting around in the water as you look out onto the lake. Even the other locations, which you will unlock as you progress, maintain the same artistic style and loveliness.

The audio is okay as well. The sounds of nature surround you and, again, add to the atmosphere, along with the sound of your line ‘plopping’ in the water. However, these natural noises are disrupted when you make a catch, with chimes and bings and whistles that would not be out of place in an amusement arcade.

For me, the two sets of sounds are poles apart and do not integrate neatly together as part of the holistic experience. That said, this is a minor gripe and doesn’t really take away from the overall gameplay.

The longevity of the game is a little difficult to describe and I think it will depend on how much you enjoy the basic gameplay.

There is a variety to the game – there are lots of different fish to catch and you will earn money for catching them that can be spent at the shops in exchange for better equipment and bait.

You will also get to meet the locals and unlock new locations as the story unfolds.

And even when you have completed the story mode, there is the option to continue and try to catch all the species of fish in the fish-o-pedia. And then try to catch them all with a 3-star rating.

So, if you enjoy the basic gameplay, then there is plenty to keep you occupied for many hours. However, if the repetitive nature of catching fish does not float your boat, you may become bored very quickly.

Bait! is a short adventure, but it packs plenty of charm and is an easy sell for anyone looking to introduce their friends or family to VR.

The gameplay itself may be too simplistic or repetitive for some people’s tastes, but the colours and environments are so bright and inviting that it will help pass the time in a relaxing way for all.

There is an issue with the gameplay mechanics (as discussed above) but this can be changed in the settings.

And, the game is free to download, so I can’t really complain about the value for money.

All in all, I think Bait! will be a good game to try for many people, kids and adults alike.